Andrea Doyle is a pianist and teacher with a teaching studio in the South Hills of Pittsburgh, Pennsylvania.

Contact Andrea
NEWS FOR STUDENTS
Wonderful month of MAY!
One of the world's eminent pianists, Igor Levit, recently made his debut performing with the New York Philharmonic, although his New York debut was eight years ago.  Levit has been on my personal piano radar since at least 2015, when he released an album that included the amazing Rzewski variations for piano "The People United Will Never Be Defeated".  I have since followed Levit, and especially during the pandemic as he played from his home in Berlin; so comforting and reassuring.  On Friday he played the Brahm's Piano Concerto No. 1  with the Philharmonic; it was given a great review which you may read here. Include in the review is a link to a video (you may also find on youtube) of Levit's encore, an arrangement by Busoni of Bach's chorale prelude "Nun Komm' der Heiden Heiland".  Listen and let me know what you think.
Clearly, world events are on everyone's minds these days.  I am always eternally grateful to have music in my life, but perhaps never more so than in uncertain times.  I have been aware of some music of the Ukrainian composer named Valentin Silvestrov, but had not been overly familiar with his music for piano.  Silvestrov has been living in Kyiv prior to the invasion of his country by Russian forces, but has recently escaped to Berlin with some members of his family.  I link an article here for you to read about this composer.  I began to familiarize myself with more of his music this week, and have really fallen in love with his Bagatelles for piano, among some other of his compositions.  I encourage you to seek them out, and I link here a youtube video of Helene Grimaud playing Silvestrov's third Bagatelle for you to explore.  I have been learning some of the Bagatelles myself this week.  Ask my to play one for you at your lesson!  In addition, the Pittsburgh Symphony is sponsoring a concert to help in relief efforts, and the pianist Leif One Andsnes who is in town to perform the Britten Piano Concerto will play the third Silvestrov Bagatelle, as well.
I listened to a beautiful orchestral piece celebrating Spring recently; Lili Boulanger's "D'un Matin de Printemps".  I link it here for you to enjoy as well.  It is full of energy and sparkle, and conveys the promise of a lovely spring morning! Lili was the first woman to win the Prix de Rome composition competition in 1913; sadly her career was cut short by her death at age 24.  Besides celebrating spring, we celebrate woman musicians this month, so I also wanted to share two very recent performances by two pianists that I admire greatly, Angela Hewitt and Ingrid Fliter.   Both are performing at the wonderful Wigmore Hall in London.  Ingrid Fliter played Haydn, Scarlatti, and Chopin, but please listen to her performance of the Schumann Symphonic Etudes!  Simply fabulous!  Angela Hewitt always plays a Fazioli grand; it sounds great in this performance.  I link here as Angela performs two Mozart Sonatas, four of Bach's Preludes and Fugues from "The Well-Tempered Clavier" (works that she knows inside out), and then Ravel's "Sonatine" and a work by Chabrier that you may never have heard - "Bouree fantasque".  Let me know what you think of their performances!
I watched an interesting lecture on youtube recently.  Professor David Witten at Montclair University discussed Chopin's sketches regarding technique.  The lecture is entitled "The Greatest Method Book Never Written:  Chopin's Sketchbook for Pianists".  I found many of his comments to be thought-provoking; Prof. Witten is also an engaging speaker!  The video is a little under forty minutes, and I think you may enjoy as I did!  Let me know your thoughts!
Some of you may tire hearing me say that the study of music is a lifelong endeavor, but truly, I learn of new composers, performers almost every day that I previously knew nothing about. For example, as much as I have admired the music of organists Marie-Clare Alain and Gillian Weir, I never knew about Jeanne Demessieux, born 100 years ago, who was an astonishing performer and virtuosic composer.  I link a New York Times article here, with incredible performances of her music played by Paul Jacobs (who is from Washington, PA., went to Curtis, and is chair of the organ department at Juilliard).  Please do watch the inserted youtube video of Paul performing Demessieux's "Octaves".  I watched with dropped jaw!!  Jeanne Demessieux was deemed " the greatest organist of all generations" by none other than her teacher Marcel Dupre.  Maurice Durufle, as he was finishing his Requiem said that "next to Demessieux, the rest of us play the pedals like elephants".  There is also a link in the article to a wonderful performance of Demessieux's Te Deum by Renee Anne Louprette.  Sit back, turn up your speakers, and prepare to be wowed!!

Some of you will remember that as we studied compositions for the piano dating from the early 20th c. we discussed the great pedagogue, Nadia Boulanger.  She became the most renowned composition teacher of the 20th century — if not of all musical history. Her pupils, the so-called “Boulangerie,” included such luminaries-to-be as Aaron Copland, Philip Glass and Quincy Jones. The composer Virgil Thomson once described Boulanger as a “a one‐woman graduate school so powerful and so permeating that legend credits every U.S. town with two things: a five‐and‐dime and a Boulanger pupil.”
And that is largely how Boulanger, who died in 1979 at 92, is still remembered today, as a great teacher who taught great composers. This subordinate role is one that women have often played in music history: mothers, muses and schoolmarms to the men of the canon. A two-week festival, Nadia Boulanger and Her World, which begins Aug. 6 at Bard College, invites a reconsideration of her life and legacy.  I enjoyed reading more about Boulanger in this article in the New York Times which I have linked here.  There is a fantastic playlist in the article that I listened to and liked, along with some great photographs.  I also ordered the book produced with the BARD Festival entitled Nadia Boulanger and her World.  I will read and let you know what I learn! 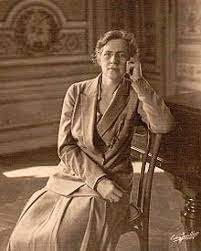 WHAT is an "Etude"??  Harvard Dictionary of Music describes as "A composition designed to improve the technique of an instrumental performer by isolating specific difficulties and concentrating his or her efforts on their mastery.  A single etude usually focuses on one technical problem;  etudes are usually published in groups more or less systematically covering a range of such problems in a range of keys."  This month we will focus on etudes.  If asked to name one famous collection of etudes, many pianists would come up quite easily with those written by Czerny and Hanon, but immediately thereafter, one would probably say those by Chopin (I linked Pollini playing all twenty-four).  There are, however, thousands of etude for piano, and every pianist should have a good number under their fingers!  Those etudes by Claude Debussy are among the most glorious, in my opinion;  listen here to a young Mitsuko Uchida practicing during an interview regarding her performance of the Debussy Etudes and see if you agree!  To listen to the set in entirety, I link one of my fav pianists, Jean-Efflam Bavouzet, performing the Debussy.  Now, another set of etudes that I just adore are those incredibly difficult ones by Gyorgy Ligeti.  Listen to No.13 dubbed "the Devil's Staircase", performed here by another favorite pianist of mine, Pierre-Laurent Aimard.  There is also a good video by Aimard where he discusses this work in detail.  Alright, enough!  Now, let's get those fingers moving!  What etude are YOU working on today?

​
One of my favorite quotes by Sergei Rachmaninov:
“Music is enough for a lifetime, but a lifetime is not enough for music.”
​Hey, gardener/pianists, check out student Gwen's wonderful garden blogs! Visit Gwen's
​ website:  GwenWisniewski.com.